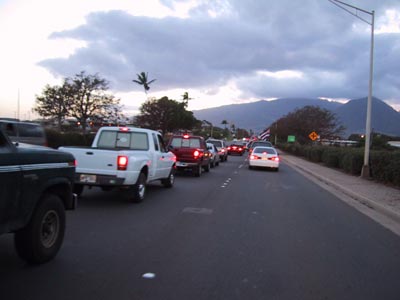 The expression of "Hawaiian Power" was displayed on Sunday, February 04, 2001 at the Kahului Airport demonstration for Hawaiian Rights.

At about 5:30pm., over 5 hundred people gathered at the staging area just outside of the Kahului Airport. There were the Kupuna (Elders), the Makua (parents) the Opio (children), non-Hawaiians and everyone that supported the effort to protect the rights of the native people of this land. There were closing prayers, chanting and singing, then someone said, lets go to the airport with our cars.

With horns blaring, ti leafs hanging from antennas, Hawaiian flags turned upside-down (sign of nation in stress), children in pick up trucks yelling Ku'e (resist) drove at a very slow speed, blocking all the lanes to the Kahului Airport. Security Guards at the airport could do nothing but wave back to the hundreds of people moving very slowly in front of the airport. As they made their way onto Kealani Highway, another group was driving towards the airport at a very slow speed effectively blocking the 4-lane highway. There were people from Kipahulu, Hana, Lahaina and every place on Maui in the motorcade. At one point the entire highway was blocked for a mile. All the people then went to Hale Nanea to have dinner. We then heard reports that the National Guard was called out, but everyone was off the road.

Living on Maui all my life it was something I have never seen before. Finally, Hawaiians are waking up and realizing that they have to put their commitment on the line. We must not agree to uphold the rules of this government that occupied our land and impose western laws foreign to us. These lands that the airport is built on are so-called Ceded Lands (lands that were never actually ceded, but were taken from the Queen and her Government during the "overthrow" and purported annexation). The organizers of this protest must realize that we must talk up and be vocal and it is not their job to enforce the rules of the airport, which confined us in boxes and places where we could not make contact with the incoming or outgoing tourist. The airport personnel from Oahu even told us that we could not chant, sing or pray. It is a constitutional right under their own laws and I reminded them of that and sang and chanted as they spoke to me.

Throughout these last hundred or so years of our history we have been silent. We allowed the "great white fathers" to pollute, bomb and cover our land with concrete in the name of their holy law and now they want to use this same law to take away our cultural and spiritual rights that were given to us by the Kupuna Kahiko (ancient elders) thousand of years ago. We must Ku'e (resist) in the loudest voice and insist that we are heard now. We cannot wait any longer because if we do our children and grandchildren will suffer as we have.

Tourism is our major resource and the airports are where they all have to pass to reach these islands. It is an international venue as people come from all over the world through the airports. This is where we must make a stand. The tourist must know that although Maui is the number 1 island in the world, which they call "paradise", the native people of Hawaii make up the social ills of these islands and are very unhappy in this land that is the basis of our culture. Inu ikawai awa awa (drink the bitter water) and unite, KU'E.