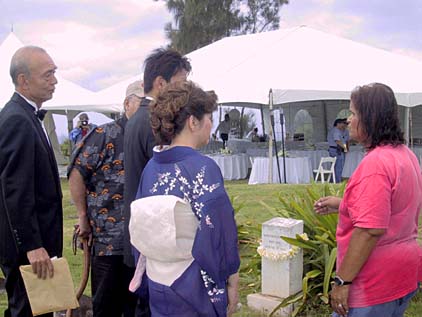 MALIKO POINT, Maui >> A wedding reception was moved from a site near a graveyard yesterday after native Hawaiian family members whose ancestors were buried there protested the activity.

Patricia Madella said about 28 members of her Kalawaia family were buried at Maliko Point and that having a wedding within 30 feet of the gravestones was disrespectful.

The graveyard is located next to a residence that was holding the wedding ceremony.

Sky Lewis, the owner of the residence, also owns the land on the graveyard but has agreed to maintain it and allow access to the grave site, state officials said.

Police Sgt. Brian DeMello said Lewis also had agreed not to hold activities within 30 feet of the grave site without receiving permission from the state's Lanai-Maui Burial Council.

DeMello said no permission was granted, and there were temporary tents for the reception established within the 30-foot limit.

Madella said she was planning yesterday to put flowers on the grave of her great-great-great-grandmother Nakiaha Kalawaia, born in 1860, who died in 1924. Madella noticed a reception was planned.

The wedding party agreed to move the reception nearer to the house and away from the grave site.

Groom Taro Koki, along with his parents Takamitsu and Eiko Koki, apologized to Madella and her family. The Kokis brought out plumeria leis and offerings to put at the burial site.

"We didn't know it would be a problem," Taro Koki said.

"There was no intention to be disrespectful, and it's sad that it was misinterpreted," Lewis said.

Lewis said he has bent over backward to be fair and worked out an agreement with the burial council to set aside more than two-thirds of his property for preservation.

He said the wedding was for a friend, and he did not plan on having any more.

"This is too stressful," he said.

See Photos of the situation