Also see clipping of "Papa's work is complete"
from the Maui News, December 10, 1998

PAUKUKALO -- When the Rev. David ``Kawika'' Ka`alakea decided that, at nearly 79 years old, it was time to pass along his spiritual torch, he knew he had to do more than just sort through a list of names to find the one who would best carry on his message that blends love of God, land and the ways of the old.

He had to look deep within.

And so, after looking deep within at all the possible successors who came to mind, Ka`alakea, a Pentecostal minister, chose Charles Kauluwehi Maxwell Sr., 61, to inherit his legacy. In a ceremony beginning at 10 a.m. today at Jesus Is the Way Church in Kihei, Ka`alakea -- called Kahu by some and Papa by others -- will officially anoint Maxwell, one of Maui's more outspoken Native Hawaiian leaders.

``You make me strong,'' Ka`alakea whispered to Maxwell as they talked story about the old days and prayed for the days yet to come.

Maxwell, a Catholic, will not take over Ka`alakea's Pentecostal religious mantle but assume the Hawaiian spiritual duties, an imposing responsibility that will include performing blessings and weddings while always conducting himself in a manner that would meet the approval of God.

For Maxwell, all of this was unexpected.

``I was shocked,'' he said. ``When I came down here (the Monday before Thanksgiving), Papa put hand on his head and told me, `I want you to take over my ministry.' I couldn't believe it. I never even asked for this.'' 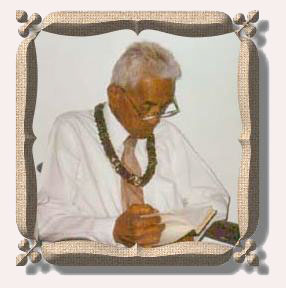 Maxwell, understandably, didn't think he was up to following in the spiritual path carved for more than 40 years by Ka`alakea, who has evolved into a divining rod for wisdom, guidance and aloha in the Hawaiian community.

Although both men have been longtime island leaders, they didn't form a spiritual bond until about 10 years ago when they were among the many Hawaiians who united to protest the unearthing of more than 1,000 ancient burials at Honokahua during the development of a proposed hotel.

Many of those involved in the demonstrations were younger Hawaiians -- Dana Naone Hall, Leslie Kuloloio, Maxwell and others -- who looked up to and learned from the kupuna who stood with them. Ka`alakea became a much-needed link to the past.

``Kahu was our spiritual rock,'' said Hall last week. ``He would pray directly to the ancestors, directly to the people we were putting back in the Earth. He connected us -- those who had passed before us to those of us who were standing there. He opened the way -- that's what kupuna do for you.''

Even when situations have turned controversial, Ka`alakea has managed to balance his deep feelings for the land, the Hawaiian people and the beloved culture of the past with an undenying love for God and goodwill toward all. The situation at Honokahua -- which ended with the graves being restored and preserved in place while the location for the hotel was moved -- proved to be one of many incidents when Ka`alakea helped lead the way.

``How great a man Papa is,'' said Maxwell, who composed the song ``Honokahua Nani E'' to chronicle the emotion of that landmark event. ``His mana`o (thinking) is just something. I can never compare to this man. His teachings will always follow me.''

Ka`alakea was born in Kipahulu in 1919, but his spiritual and cultural awakening would not happen until decades later. Although he grew up surrounded by the Hawaiian language and the old ways, he began speaking English more and more and left the tongue of his ancestors behind him. He became a paniolo known mostly as David, started raising a family and was living a fairly ordinary life until 1953, when everyone, except for him, noticed that something was wrong.

Finally, Ka`alakea did. The doctor read the X-rays and called the ambulance.

Ka`alakea was assigned to a room he later learned was for terminal cases. Another man was already in another bed.

Soon, Ka`alakea had a visitor. It was his father, a deeply spiritual man, who arrived in tears.

``He came, he sat down -- not on the chair, but on the bed right next to me -- and then he called me my Hawaiian name, `Kawika,' '' he recounted. ``After he said that name, he looked up to the heavens with tears in his eyes and he said, `Father, it's your will. But it's not my will. If you take my son home with you, then it's your will.' He said all of this in Hawaiian.

``For the first time in my life, I prayed with my father the Lord's Prayer. I followed my father all the way to end. Amen. He picked up my hand and put it to his head. Then he left and he never said goodbye.''

Three days later, Ka`alakea had a dream or a vision: A light -- ``bright like lightning'' -- came to his room and flashed three times. He said it seemed as though someone were behind the light.

Not long after that, his roommate passed away and the doctor re-examined Ka`alakea.

The doctor was stunned.

Ka`alakea was getting better. He no longer needed to be in a room for the critically ill.

To this day, Ka`alakea believes that God took his roommate instead of him. Although he would need two long years in the hospital to fully recover, he eventually got well.

His new life was just starting.

When Ka`alakea was finally able to leave Kula San, he learned that one of his brothers had been seriously injured and was left paralyzed, unable to walk. When Ka`alakea entered the room, his brother was startled at his robust appearance.

And then Ka`alakea did something he'd never done before. He took his brother into his arms and began reading Scriptures from the Bible. He told his brother to stand and walk; his brother did.

``And then I knew God had called me to the ministry,'' said Ka`alakea.

Ever since, he has spread the word of God, spoken the Hawaiian language and kept alive the culture of old.

Maxwell said there's no conflict between keeping Hawaiian traditions and clinging tight to the Christianity brought to the islands by the missionaries.

There's also a place for the religion of the forefathers, said Maxwell. He often gets questioned about his connection to his family aumakua (family diety), the shark. ``I don't pray to the shark, I don't worship it,'' he said. ``But my ancestors did and I respect that. If Hawaii is to remain Hawaii, then we have to respect what our ancestors worshiped.''

With his new spiritual responsibility, Maxwell said, he'll have to take stock of his life.

``I'm going to have to reassess things,'' he said. ``My whole life is really going to change. I've always been a warrior, but now I'll be a warrior for God.''

Ka`alakea chose Maxwell partly because of that warrior side of him.

``I like the teaching he's doing now,'' said Ka`alakea. ``He knows the concerns of the Hawaiian people today. It's very critical what's going to take place. . . . ``I think it's rough now. I know Charlie knows about that. This boy, Charlie, he doesn't give up. This is our home.''

The spiritual torch has been passed.