Dedicated to Ku'ula, the god of fishing 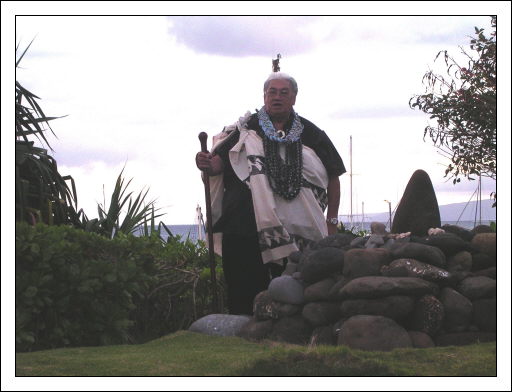 The Ahu was built by Kahu Charles Kauluwehi Maxwell Sr., Hawaiian Cultural Practitioner, members of his family, Lawai'a (fishermen) and the staff of the Maui Ocean Center in March of 1998, two days before the grand opening.

On December 7, 2003, this shrine was visited by Master Navigator Nainoa Thompson and the crew of the Polynisian Voyaging Canoe Hokule'a. They brought a pohaku (stone) from the valley of Hakipu'u on Oahu and placed it on the Ahu as a Ho'okupu (offering). An ancient navigator named Kaha'i lived in the 17 Century in this valley and was famous for traveling to Samoa and bringing back seeds and breadfruit. Whenever Kamehameha the Great passed the valley of Hakipu'u, he ordered the sails lowered on his canoes in honor of this ancient navigator.

See more pictures of the Hokule'a's visit to Maui and the shrine.

Return to Voyages with Hokule'a